Hooray!  It’s finally here!  Welcome to The Great Gone With the Wind Readalong.

I’ll summarize our chapters here, giving some of my impressions and linking to fun resources and information.  Then I’ll open it up for discussion.  Please be civil and speak your mind!  To make things a bit more fun, one commenter will be chosen at random to receive a fabulous set of Scarlett O’Hara costume magnets.  I’ll leave the contest open until we meet again on August 15 to discuss Part 2 (Chapters 8-15). 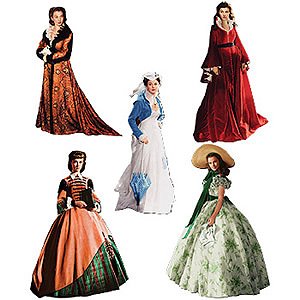 Scarlett O’Hara was not beautiful…with those words, Margaret Mitchell plunges us into a world of sight and sound.  I was really impressed on this rereading at her command of description and detail, from the colors of the furrowed earth of Tara to the essential frills and furbelows of Scarlett’s sigh-worthy wardrobe.

We meet 16-year-old Scarlett in her element, surrounded by the doting Tarleton twins and teasing them about their recent expulsion from the University of Georgia. But when the conversation veers away from her and toward the soon-to-be-announced engagement of Ashley Wilkes and his cousin Melanie Hamilton, a chill falls over the pleasant afternoon.  No dinner invite for you!  What’s Scarlett’s deal?

Of note:  I thought it was interesting that this chapter doesn’t really come close to Scarlett’s motivations or thoughts.  Instead, it stays with the lively Tarleton twins and our first glances of Scarlett are through their approving eyes.

Trivia:  Margaret Mitchell struggled over this chapter and didn’t even deliver it with her draft of the book.

Scarlett rushes away to await her father despite Mammy’s dark protestations about the dangers of life sans shawl.  She’s heartbroken that her crush, Ashley, is even considering marrying another. She’s wanted him since she was 14 years old, even though she admits she doesn’t quite get his poetic, dreamy ways or his lazy aloofness.  But stumpy Gerald O’Hara will hear nothing of it, reminding her that like must marry like to ensure happiness.

Of note:  MM gets straight to the point when talking about love, doesn’t she? I love how Scarlett childishly believes that she can change someone so different from herself.

What I imagine Solange Robillard, Ellen’s snooty mother, to look like.

This chapter focuses on the strange alliance of Ellen Robillard O’Hara, a tireless, tall, and unfailingly gracious coastal woman, and preening, rough Gerald O’Hara, an Irish immigrant decades her senior. We learn of Gerald’s acquisition of Tara in a game of cards and his need for a rich, competent woman to run his plantation…and of the mysterious failed love affair that lead Ellen to accept Gerald’s hand in marriage.  Scarlett desperately wants to be a great lady like her mother.  Too bad she’s inherited her father’s stubbornness and temper.

Of note:  I love this chapter for its eye-opening look at the lot of a plantation owner’s wife in 1861.  Ellen’s entire existence is devoted to the comfort of her husband, despite the huge toll it takes on her internally.  How like Scarlett to only see the composed outside and never understand the tremendous act of will it must take for Ellen to balance her many responsibilities.  Of course, she’s helped by hundreds of slaves whose lot is doubtless far worse than hers. Learn more about Ellen Robillard’s education at Gone With the Wind Scrapbook.

Though she’d rather run off and cry, a miserable Scarlett must preside over dinner while Ellen labors over trashy Emmy Slattery’s newborn child.  The family welcomes Dilcey, wife of Gerald’s valet, Pork, and Ellen returns home just in time for prayers.  A moment of silent reflection results in a foolproof plan:  Scarlett will simply tell Ashley she loves him at the barbecue tomorrow, then snap him up and be done with it!  Brilliant.

Of note:  Loving the look at quiet family life in this chapter.

Trivia:  The term “broad wife” (in reference to Dilcey) refers to a male slave’s wife on another plantation, or “abroad.”  Often, slaves were married but never lived on the same plantation.

Ten o’clock and all’s well!  Except for Scarlett, who can’t figure out what to wear to the Wilkes barbecue at Twelve Oaks.  She tries and rejects several dresses, imagining that her rival Melanie will judge her harshly in each one.  Brainstorm:  why not wear a low-cut afternoon dress instead?  Game plan:  she’ll attract every man possible at the barbecue, negotiate her food consumption with Mammy, ignore the foibles of her annoying sisters and the Tarleton girls, and take Twelve Oaks by storm.

Of note:  Great contrast between what young ladies should hear and should not in this chapter, embodied by the sex-and-horses obsessed Beatrice Tarleton.  Also, the descriptions of Scarlett’s wardrobe are good enough to eat.  GWTW Scrapbook does some impressive detective work and finds possible inspiration for Scarlett’s dresses in this image-heavy post of period fashion plates.

Slave woman and child.  It was hard to find non-idealized images of Mammies for this post.

Barbecue time!  The Southern hospitality meter turned up to 11, Scarlett enters the barbecue only for a glimpse of a bad-looking man.  Turns out he’s Rhett Butler, a Charleston man who is not received after an ill-fated drive with a lady in the late afternoon.  But there’s no time for strangers, no matter how rakish:  Scarlett’s got work to do, and she won’t be satisfied until she snags enough men to make Ashley writhe with envy.  We meet plenty of party-goers in this chapter, from frivolous Honey and old-maidish India to pointdextrous Charles Hamilton and old-maid-in-britches Frank Kennedy.  And we see the total devastation of Scarlett’s hopes as she comes on too strong to Ashley, who doesn’t go for her charm and embarrasses her greatly in front of that troublemaker Butler.  God’s nightgown!  She’ll show them!  Scarlett impetuously accepts the hand of Charles Hamilton to spite Ashley…and the Civil War comes to Clayton County.

Of note:  Wow, could much more happen in a single chapter?  I love the contrast between Charles’s dreamy love and Scarlett’s self-absorbed machinations.

Trivia:  Supposedly, this house was the inspiration for Twelve Oaks.

Well, that was quick. No sooner is Scarlett a miserable bride than she’s a miserable widow and mother.  With Charlie dead of measles, Ashley and Melanie married, and Wade Hampton crying away, Scarlett can’t quite process her new life…or her new role as a quiet, unattractive widow.  Will a trip to Atlanta to stay with her new sister-in-law prove a distraction?

Trivia:  Scarlett’s “second-day dress” was traditional for many Victorian-era brides, who would wear that dress as a best dress in portraits and at special occasions for years after their wedding.

Feel free to respond to some of these questions to get the discussion going. There’s no right or wrong answer!

Antebellum life:  MM goes to great lengths to describe the vigor and leisure of the South.  What’s your opinion?  How do you respond to her depiction of slave life and the primary slave characters in the book?

Marriage:  Gerald states that like should marry like, but he’s nothing like his sedate wife.  How is marriage portrayed in the book so far?  What does marriage give and take away from the characters?

Minor Characters:  MM gives great voices and descriptions to the book’s minor characters.  Which ones have you taken a shine to?

Erin blogs daily for Smithsonian.com. She is a contributing editor at Modern Notion and blogs on arts and culture for JSTOR Daily.